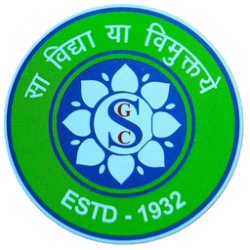 South Calcutta Girls’ College is an institution steeped in history. Its foundation can be traced back to the efforts of some lawyers of the Calcutta High court of the early part of the 20th century, who were keen to promote higher education for women. A significant step was taken with the formation of the Beltala Girls’ Education Society sometime in the 1920’s with the objective of setting up a college in South Calcutta for girls of educated middle-income families. The society was chaired by the great freedom fighter Deshbandhu Chitta Ranjan Das, while Peary Mohan Chatterjee was appointed secretary. Till the 1930’s the Diocesan College on Lansdowne Road was only women’s college in south Calcutta. But the need for a new institution was keenly felt when it closed down in 1931. It was at the initiatives of the Beltala Girls’ Education society that South Calcutta Girls’ College was founded in July 1932. Till 1946, it functioned as a morning college within the premises of Beltala Girls’ School. The residential facility was shared by students of the School and College, and convenient bus arrangements were made for the day scholars. Miss Dorothy Moses served as the first principal, while the Managing Committee was headed by Bipin Bihari Ghosh (member of the Legislative Council) who took over as the chairman of the Beltala Society after the death of C.R.Das. Other member of the Managing Committee included Sarat Chandra Roy Chowdhury, B.L., Advocate Calcutta High Court, Peary Mohan Chatterjee, and poet Kamini Roy. The College Library was later named after Peary Mohan Chatterjee.Distinguished academicians and the members of the judiciary have served as president or vice president of the governing body educationist Charu Chandra Chatterjee , Justice B.K Mukherjee, Justice J.N Mazumder,V.C. P.N. Banerjee, Lady Protima Mitter, grand daughter of Sir Ramesh Chandra Dutta, was appointed as the president of the Governing Body in March 1951. On 1st july 1946, the College and hostel were shifted to their present location on Sarat Bose Road. 1946-1947 was a year of unrest and violent upheavels over most parts of the country. In view of the tumultuous times, Victoria Institution placed a request for temporary accommodation of their classes and hostel in the premises of SCGC, and the Governing Body readily acceded. This spirit of cooperation among the college of the city is brought forth by another instance : as our College initially could not provide laboratory facility to Botany students, Bangabasi College very willingly permitted our students to carry out the practical classes in their laboratory.

At its inception, the College was provided affiliation by Calcutta University for conducting IA and BA (pass) courses. In 1957, it obtained affiliation for introducing honours courses in two subjects- Bengali and History; followed by other disciplines in subsequent years. Despite sincere efforts towards constant upgradation, a serious impediment was the severe shortage of space in rented old and derelict residential building. It was due to the largesse of the Govt. of West Bengal , and personal contribution and hard work of the teaching and non-teaching staff, that the present premises could be acquired by the College authorities in 1987. Under the able guidance of our President, Dr. Gouripada Dutta, the college could successfully embark on its expansion programme. The College is presently housed in a new six storeyed building for which it has received grants from the Government of W.B., the Planning Commission and UGC Undergraduate courses are presently offered fourteen disciplines with Honours degree in ten departments. Employment oriented course have introduced as well – Certificate and diploma courses in Computer Programming, Career and Personality Development course and a Vocational Training Programme in Tailoring and Beautician course, which is open to girls of the neighbouring slum area who are in the BPL group. A gymnasium has also been set up which is to be opened shortly. GIS (Geographical Information Service) Programme has been launched in 2005, while Netaji Subhas Open University is likely to open a study centre in the College for Post Graduate course in Geography. South Calcutta Girls’ College has played a seminal role in the enhancement of higher education of young women. Devoted teachers, maintenance of discipline and harmonious relationship amongst students and teaching as well as non- teaching staff, have ensured an ideal educational atmosphere. Our students have performed consistently well in academics as well as extra-curricular activities. The alumnae are responsible well placed citizens, who have served as minister, college and university teachers, judges and advocates. Renowned artistes Pratima Barua and Maya Sen graduated from this College. It has indeed been a long journey and at the threshold of its PLATINUM JUBILEE, the College pledges to hold high the beacon it has held since 1932. We look forward to a bright future, and continue with renewed vigour to preserve our heritage and continue our mission of spreading the light of knowledge to liberate woman from the fetters of ignorance.